Ikea Centres and the Mutschler Group signed a joint venture agreement for the development of Designer Outlet Algarve.

Start of phase 2 in Dalton Park

Dalton Park in Murton (County Durham) celebrated the official start to its Phase 2 development with a traditional “groundbreaking” ceremony on June 19, 2015, with local dignitaries and project team members.

Amsterdam The Style Outlets plans to open its doors in 2017. With this project, Neinver takes a further important step in its growth strategy in the outlet sector.

An outlet center for Wuppertal

Wuppertal, a city of around 350,000 inhabitants, is getting an outlet center. It will be the largest in Germany. The investment amounts to €120 million.

OUTLET SHOPPING: ARE YOU IN OR OUT?

A new breed of outlet shopping malls is emerging. Outlets that no longer sit on the periphery of city life but exist at the heart of an urban development complementing retail parks, shopping centers, and high streets alike. For example the London Designer Outlet.

A VIADUCT AS A NAMESAKE

Southern France will soon have a new shopping destination. Viaduc Village, developed by Etche France Group, will welcome customers from the beginning of 2016.

Neinver has obtained ISO 50001 certification from TÜV Rheinland for all its shopping and outlet centers. The company is the first European business in the retail real estate sector to have an energy management system that complies with the internationally recognized standards of the International Organization for Standardization (ISO).

SHERIDAN’S FIRST STORES IN THE UK

Sonae Sierra and McArthurGlen recently signed an agreement to develop a designer outlet in Málaga in southern Spain.

Hammerson and its partners in VIA Outlets, APG, Meyer Bergman, and Value Retail, have acquired three further centers for their newly created venture established to take advantage of further growth in the European outlet sector. Purchased from The Carlyle Group, the Freeport Portfolio of outlets includes Alcochete in Portugal, Kungsbacka in Sweden, and Excalibur in the Czech Republic.

Founded in 1981 in Los Angeles, Guess is an American clothing brand and retailer that also markets accessories such as watches, jewelry, and perfumes. It will take a 161-sq-m unit in the Fashion House Outlet Center in Bucharest. 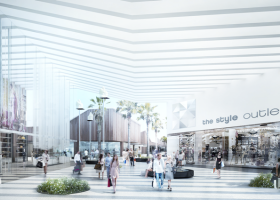 OUTLET CENTERS ARE ADAPTED TO REGIONS

According to Barbara Topolska, COO of Neinver, the company does not just build open-air centers. Instead, it develops “villages” that draw upon the tradition, history, and architecture of the place in which they are built.