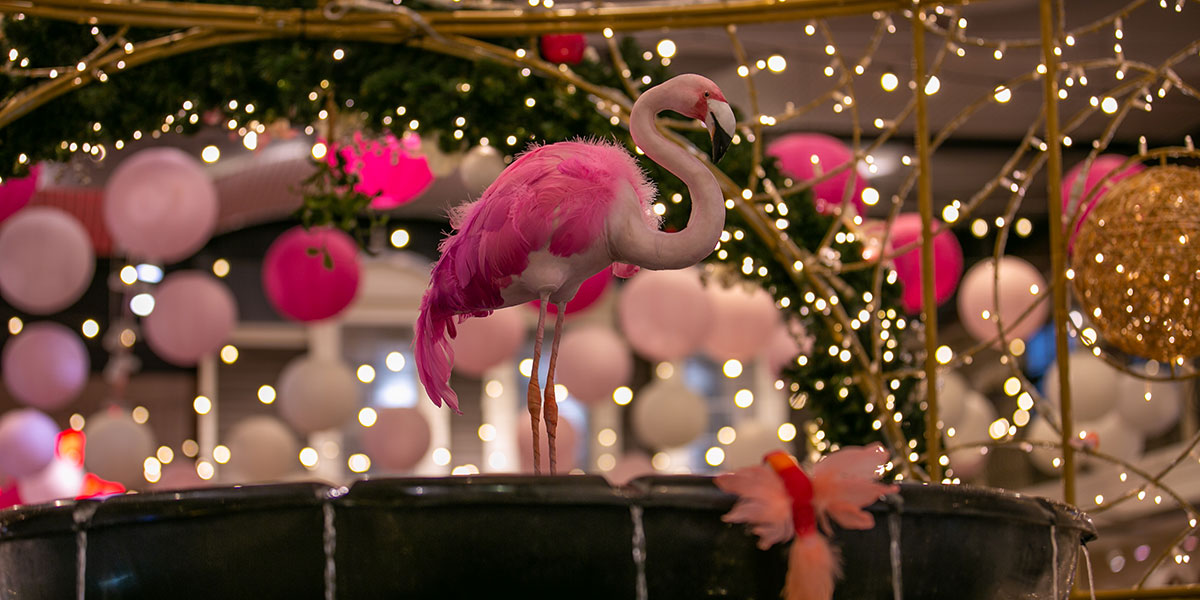 Christmas at Swedish shopping center Väla Centrum didn’t begin in December. It began in March. At the top of marketing manager Ulrika Nordström’s wish list was the transformation of the large spaces within the shopping center with stand-out lighting and decoration that would be consistent with the character of the brand.

“Here in Sweden, our Christmas traditions focus less on Christmas Eve, Santa and piles of presents and more on a festive time filled with holidays and celebrations that focus on food, friends and family. I knew early on in the year that I wanted to create an extraordinary experience, and that I wanted that experience to embrace Väla’s brand, but I wasn’t quite sure what that would look like. With that in mind, I knew that it made sense to get the team at MK Illumination team on board well in advance of the festive season,” says Nordström.

To help Nordström realize her vision, the team at MK Illumination Sweden put together a large, multi-disciplinary team with designers, engineers, project managers and product developers. Thanks to close collaboration and an open, on-going dialogue with Nordström throughout the project, the team was able to put together a concept that was tailored to Väla’s space, that used a mix of existing and new products and motifs, and that exceeded all expectations.

It took two nights to transform Väla Centrum plus an extra night for quality assurance. The work took place in a modular fashion, so that each morning, shoppers were treated to a little a taste of what was to come.

“It was like stepping into a new world every day. And when we then unveiled the design and switched on the lights… Wow!” says Nordström.

The center’s main square has become a glittering, Instagrammable experience, whilst the Old Square’s urban environment  has become an exotic space filled with tropical flair and some unexpected—and rather delightful!— touches that shoppers love.

Nordström has some advice for other centers wanting to create something special.

“For other center managers who want to emulate what we’ve done, my advice is this: enjoy the Väla experience, but then do something of your own. Turn your ideas into reality. That’s when the magic happens!”

PingProperties has sold the Eudokiaplein shopping and health centre in Rotterdam

The Eudokiaplein shopping and health centre situated in Rotterdam-Noord, consisting of an office complex and a shopping centre, has been sold by PingProperties, on behalf of one of the companies under management, to the Pension Fund for the Metals and Electrical Engineering Sector (PME).

Icon Outlet has revealed it experienced a record-setting August across three key metrics compared to the same month in 2019. Sales increased by 24%, average transaction value grew by 11%, and footfall rose by 10% versus the same benchmarks in August 2019.

The Board of Directors of Citycon Oyj has approved a new Restricted Share Plan 2021—2024 for the Citycon´s incoming CFO, Bret McLeod who will commence his appointment as CFO on 1 January 2022.

In November 2021, the Dutch arcade game operator Gamestate will open its first branch in Germany in Westfield Centro on an area of over 700 square meters. Over 45 arcade stations will then enable visitors to prove their skills at the latest virtual arcade products or popular gaming classics. Gamestate is another highlight in the center's leisure and entertainment segment and once again demonstrates the international appeal of the location.

FİBA Commercial Properties continues to follow up the trends in all their global investments in China, Romania, Moldova and Turkey in terms of sustainable future projects.