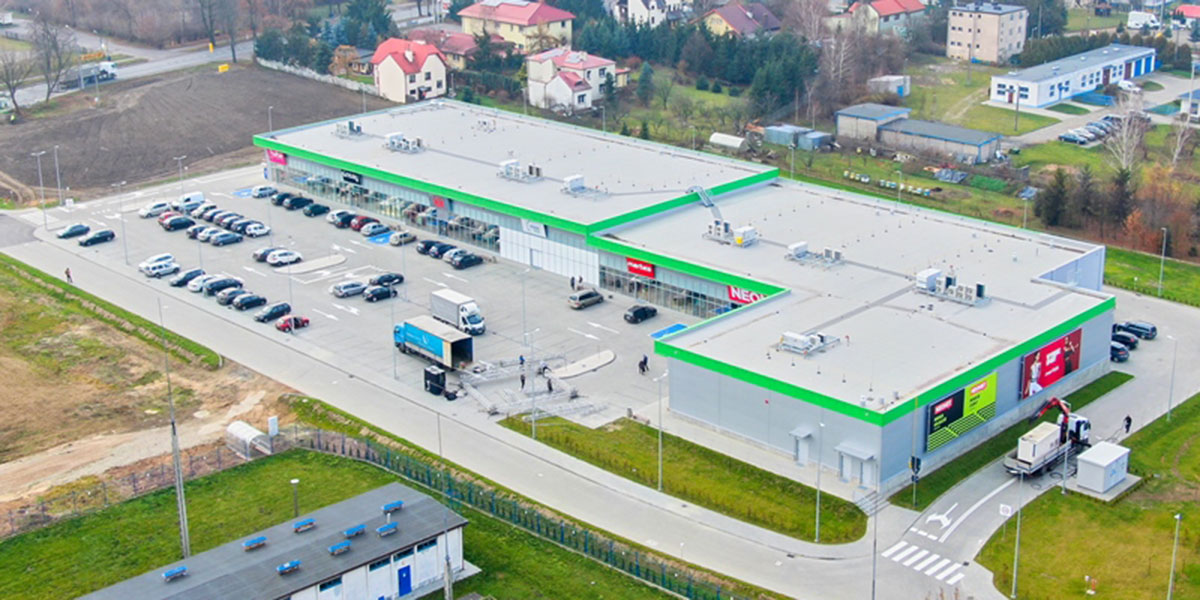 At the moment, Trei owns 23 Vendo Parks in Europe, fourteen of which are located in Poland. Rather than acting as their developer only, the company also manages the Vendo Parks.

Trei Real Estate GmbH (Trei), a property developer and property asset holder for residential and retail real estate with activities across Europe, continues to pursue its expansion plans for the Polish retail market and keeps adding to its portfolio of Polish retail properties. The investor chose the town of Łask in the metro region of Łódź to open its 14th retail park of the Vendo Park brand in Poland. The property is entirely let to retailers making their market entry in the city. The total investment costs added up to approximately 5.3 million euros. Łask has a population of around 18,000 and lies about 30 kilometres from Łódź.

The Vendo Park offers a diversified mix of various retailers. Tenants in the textiles sector include TopSecret, Sinsay Clothing and Martes Sport. The retail line-up at the Vendo Park also includes branches of Hebe (drugs), Neonet (consumer electronics) as well as of Action and KiK (both textiles and interior decoration). Construction work for the retail park of 4,500 square metres in Łask started in May of this year.

Jacek Wesołowski, Managing Director of Trei Real Estate Poland, commented: “The Vendo Park in Łask has met with serious interest among tenants. At the start of construction work, 90 percent of the units were already let. We were particularly pleased to win seven new retail formats for the location that did not use to have a footprint in Łask. Our goal is to develop the project into a local shopping destination with a comprehensive and richly diversified offer. The retail park in Łask is yet another example for the growing success of this retail property category in smaller towns: Until recently, apparel chains, for instance, limited their outlets to large shopping centres and to Poland’s leading metropolises. Lately, though, they have increasingly chosen to expand by moving into smaller-scale projects in towns with fewer than 30,000 residents.

The Vendo Park just opened marks only the start of the planned investments in Łask. On another plot of 2.6 hectares, Trei is planning a property development for the fast food chain McDonald’s. The building is scheduled to be completed by 2021. In addition, a supermarket of the Lidl brand will open next to the retail park in April 2020. More than 130 parking spots are available at the Vendo Park in Łask. The number of parking spots will increase to more than 260 after the completion of the Lidl supermarket.

The property in Łask is the fourth retail park that Trei developed in the Łódź metro region. The investor previously opened a Vendo Park in Skierniewice and another two in Łódź. One other retail park will be created in Kobyłka before the end of this year. Additional Vendo Parks already under construction in Płock and Jawor are expected to open next year.

“Before the end of this year, we will kick off the construction work for retail parks in Częstochowa and Solec Kujawski. We are planning to open another seven Vendo Parks next year. Ultimately, our goal is to build up a portfolio of 50 retail properties across Europe,” added Jacek Wesołowski.

Intu's three priorities are to look after its employees, to protect its business and to play its role in society.

Josip Kardun has 20 years of pan-European real estate investment and management experience. He previously served as CEO of Blackstone’s largest European operating platform where he managed over €10 billion of assets across 14 countries.

MIPIM 2020, scheduled to take place June 2-5 in Cannes, is transforming into a two-day, Paris-based gathering of real estate and technology leaders in September and a new online experience, MIPIM Connect, available year-round.

THE ACROSS APP IS NOW AVAILABLE!

The new ACROSS App provides even faster and more comfortable access to the latest industry news. Test our new service right now! Installing the app and access to our constantly updated ticker news and featured articles is free.

Europe’s retailing sector is reeling from the shock of lockdowns across the region to limit the spread of the Covid-19 pandemic, but the impact on the sector’s credit outlook will be uneven, says Scope Ratings.

Citycon Oyj assesses that its prospects for 2020 have weakened and withdraws its guidance for 2020 issued on 6 February 2020. At this point, the company does not specify its direct operating profit, EPRA EPS or adjusted EPRA EPS forecast for this year in more detail due to the uncertain market situation.