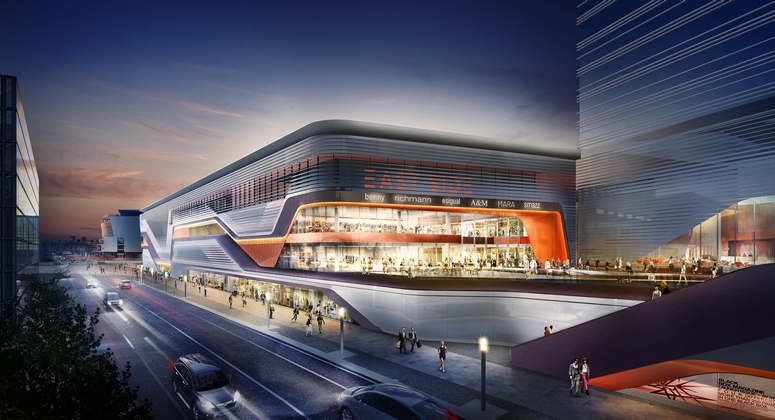 Forum Invest is represented by the project development company Freo Financial & Real Estate Operations GmbH, Berlin. The contract for the new building, which will be built using STRABAG’s “teamconcept” partnership model, totals around €84.3 million, including implementation planning. It was designed by the Dutch architectural firm UNStudio, which also designed the Mercedes-Benz Museum built by Züblin in Stuttgart.

The East Side Mall is being built in a central location in Berlin’s Friedrichshain district in direct proximity to the East Side Gallery. The opening is planned for autumn 2018. The earthworks and foundation work began in June 2016. Around 37,800 sq m of lettable space are being created on three levels for retail, services, restaurants, and events.

Contrasting, wavy bands divide the center’s façade. In addition to transparent glass elements, the facade around the enclosed areas consists of sandwich panels with deep overhanging slats protruding at different angles. There will also be two additional levels above the three floors of the mall with a total of about 760 parking spaces.

The project extends from east to west over approximately 190 m and north to south over about 110 m. An approximately 50-m-long platform connects the East Side Mall directly to the Warschauer Straße U-bahn (subway) and S-bahn (commuter rail) hub.
Züblin contributed expertise right from the planning phase

The signing of the contract for the new building was preceded by 15 months of planning. Even at this stage, Züblin supported Freo in the design and approval planning with its teamconcept (Phase 1). Both sides benefited from the knowledge and experience of each partner.