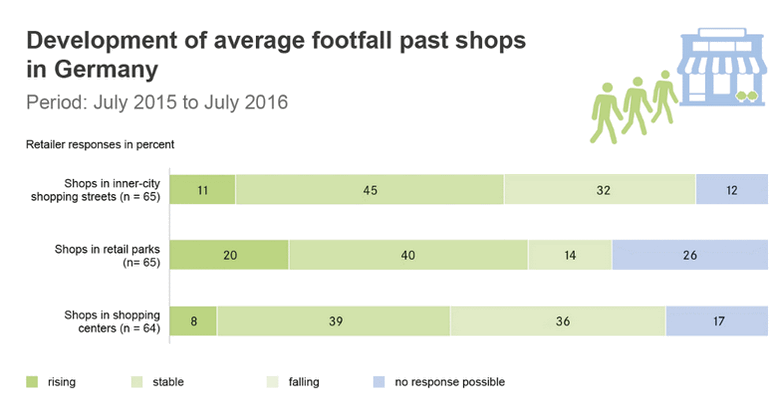 Slight Fall in the Pace of Expansion

According to the recent study “Expansion Trends 2016” by EHI and the Hahn Group, diminishing turnover and declining footfall is putting retailers under pressure.

Traders’ expectations for sales and site development are still largely positive. “More retailers are coming under pressure from the nexus of dynamic online retailing, pricing pressure from low margins, declining footfall, and high rent and utility costs, however,” explains Lena Knopf, project manager in commercial property research at EHI Retail Institute. The percentage of traders reporting diminishing turnover and declining footfall, and therefore needing to step on the brakes with regard to their expansion, has thus increased compared to the previous year. These are the findings of the current study “Expansion Trends 2016,” carried out by EHI in cooperation with the Hahn Group.

The majority of retailers surveyed measured stable footfall in the past 12 months according to the study. 20% of stores in retail parks even recorded higher frequencies. Only 14% of retail park respondents reported declining numbers. The proportion of traders who observed falls in frequency in shopping centers (36%) and in stores on inner-city shopping streets (32%) is significantly higher. A main reason for the decline is competition from the internet. This has so far not affected the supply purchases in retail parks to the same extent. In addition, a less attractive segment mix or high vacancy rates, which affect the cityscape, could be reasons for regressive development in the number of passersby.

Most traders rely on the traditional strengths of bricks-and-mortar retailing to keep shops competitive in the face of online competition. It is particularly important that they generate a good shopping environment, for instance through shopfitting measures (75%) and competent personal advice (61%).

Declining footfall is leading to varying prospects for sales trends. Although just under half of the retailers surveyed (48%) expected revenues to rise in the second half of 2016, a value slightly higher than that for the previous half year, the proportion of segments expected to experience stable sales declined from 51% to 32%. 20% of the retailers surveyed even expected declining sales. Earlier this year, that proportion was still only 5%.

71 expansion managers of large retail and gastronomy branch systems in Germany participated in this survey. The expert statements in the survey account for a total of approx. 28,000 retail and foodservice outlets in Germany. All results are summarized in the white paper “Expansion Trends 2016,” which can be downloaded for free from the EHI website.

NEW BOOK BY IBRAHIM IBRAHIM ON: WHY WE NEED TO BE FUTURE-READY!

Ibrahim Ibrahim, Managing Director of Portland Design, ACROSS Board member and a regular keynote speaker, has just published his first book: "Future-Ready Retail".

Shopingy Mall Analyser and ACROSS Magazine present the top 20 store openings to watch on a monthly basis. For May 2022 we created an Outlet Special Edition: Find here the exclusive data for the Top 20 Outlets Openings To Watch in May 2022.

Making the Most of Customer Shopping Journeys

In order to follow and fulfil customer needs, operators of shopping centers also have to support their tenants. Furthermore, integrating online with offline elements, through proptech partnerships, is the path to maintaining a leading position, according to NEPI.

Technology Trends Should Be Retail Trends

The extent to which a retailer can satisfy the needs of its customers significantly depends on the technology it utilizes and masters. Consumers have become accustomed to the often highly individualized approach provided by e-commerce, and they expect the same in the brick-and-mortar environment. Technology stands ready to meet the challenge.