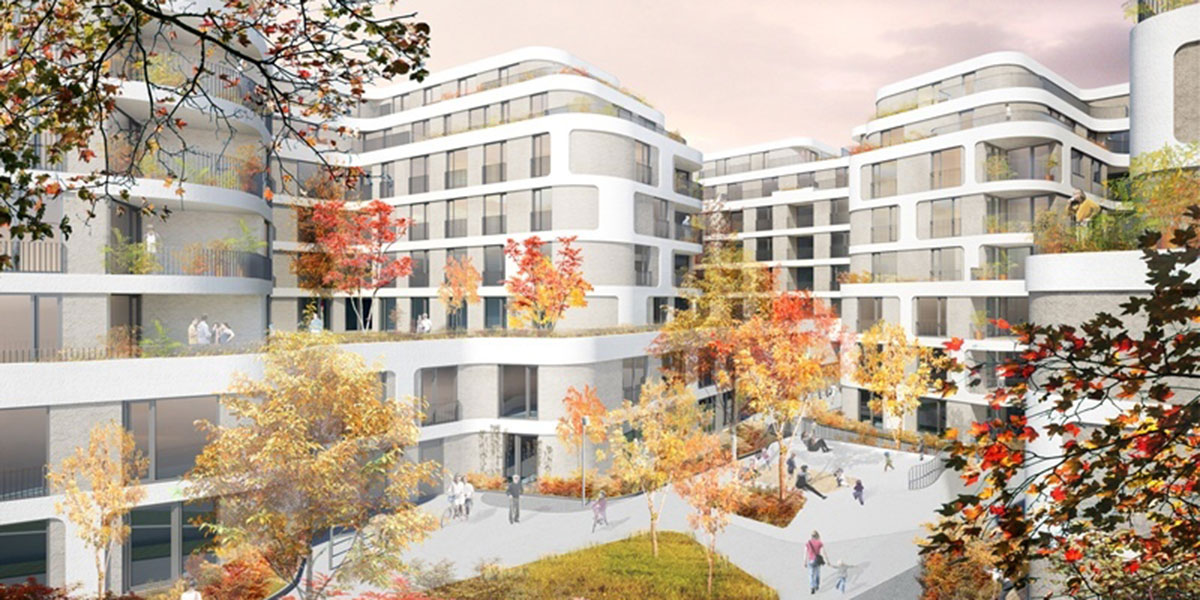 Shop below, live above

Trei Real Estate recently celebrated its first topping-out ceremony for overbuild, a single-story supermarket in Berlin. Overbuilding measures for retail properties are generally on the rise.

Shell and core of a six-story building on Pappelallee in Berlin’s district of Prenzlauer Berg are virtually complete: On December 12, 2019, Trei Real Estate, a property developer and property asset holder specializing in residential and retail real estate, celebrated the topping-out ceremony for its first project of overbuilding a single-story structure in Berlin together with the planning firms and project partners involved. On Pappelallee—at a central location in Prenzlauer Berg—the real estate arm of the Tengelmann group is developing 240 rental apartments, roughly 40 of which will be handicap-accessible. The supermarket on the ground floor will be let to the REWE grocery chain upon completion. The total investment costs add up to about 88 million euros. The building was designed by the Berlin-based architectural firm of J. Mayer. H und Partner, Architekten mbB.

Pepijn Morshuis, the CEO of Trei Real Estate, thanked the project stakeholders for their reliable input and highlighted the significance of infill densification projects in Berlin, “This plot used to be occupied by just a supermarket. Once completed, our project will provide 240 new-build apartments plus a supermarket and retail units of 2,600 sq m on the same footprint. So, we are making much better use of the available area.” Overbuilding flat-roofed single-story structures contributes significantly to the creation of urgently needed housing in the German capital.

Noise abatement as a major issue

Ruth Meister, Head of Project Development, spoke about the challenges involved in overbuilding single-story buildings. The concept requires combining two different types of use—residential and retail—in a single property. “Noise abatement is a major issue. We had to find a way to accommodate deliveries to the supermarket. We found a low-noise solution by enclosing the delivery zone.” Customer parking was moved to the underground car park. The solution also creates an opportunity to install greenery and play areas in the car-free inner courtyard. “A total of 70 underground parking spots will be made available to future residents (40 car parking spots) and supermarkets shoppers (30 car parking spots),” Meister went on to say.

Jürgen Mayer H. of the architectural firm J. Mayer. H und Partner, Architekten mbB elaborated, “The building’s signature aspect is the sinuous façade design with its curved balconies and floor-length windows. The compact arrangement of the building envelope blends smoothly into the surrounding urban structures and permits a high structural density while admitting plenty of light into the interior areas at the same time. The roof surfaces will be greened and were largely planned with a view to their future use by the building’s residents. As a result, a generous amount of open space is being created despite the high building density.”

Just one of several projects

The site on Pappelallee is just one of several projects that Trei pursues in Berlin as part of a plan to replace single-story retail properties with newly constructed buildings. Over the next few years, additional mixed residential/retail buildings will be developed on Fürstenberger Strasse and on the corner of Winsstrasse and Marienburger Strasse. For yet another project, on Köpenicker Strasse, the municipal development planning process is under way. All things considered, the company is investing about 250 million euros in the development of around 750 rental flats and 8,000 sq m of retail units.

The combination to “shop below and live above” is generally on the rise in Germany’s major cities in order to create much needed living space in these agglomerations. 2018 Aldi Nord announced that they intend to create more than 2,000 apartments at at least 30 locations in Berlin. Aldi Nord’s competitor Lidl has similar plans. The discounter has already overbuilt several supermarkets and intends to develop new project in this regard, for example in Frankfurt where 110 apartments will be created this way in the district of Gallus. It will be interesting to see if and how this combination will evolve.

The shopping resort in Saint-Etienne with its about 70 shops and restaurant cannot open as planned due to the ongoing crisis.

New SES shopping center - on May 8, 2020 the brand-new shopping mall in Slovenia ALEJA opened its doors.

Despite the COVID-19 pandemic, the construction of Galeria Wiślanka is halfway through!

Construction of the first shopping and entertainment gallery in Żory - Galeria Wiślanka is underway. Construction works are carried out in accordance with the investment schedule. Activities related to the building's raw state have been completed. Currently, installation and finishing works are in progress inside the building. Soon it is planned to hand over the first premises to tenants. The opening of the Gallery is planned for the beginning of the fourth quarter of 2020.

The new opening date of the mall in Belgrade with its 43,000 sq m of GLA will be announced as soon as possible, according to Atterbury Europe.

Due to the Covid-19 pandemic AFI Europe, the largest shopping center project to be delivered this year in Romania will not be opened as planned.