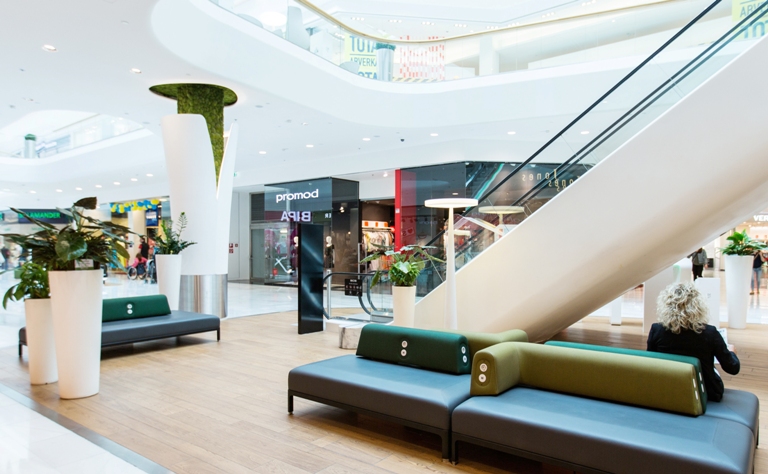 The rest areas in SCS score points with their phone charging stations, among other amenities. Image: Faruk Pinjo
Development
Jul 22, 2015 14:08

Reaching for the stars

Austria’s SCS was recently declared a 4-star shopping center. 20 of Unibail-Rodamco’s 73 malls now boast this certification related to quality of stay and service.

What was previously only known in the hotel industry is now available for shopping lovers at SCS near Vienna: The Mall and its 330 stores have recently been awarded four stars. The quality seal inspired by the hotel industry includes an extensive catalog of measures. No fewer than 684 criteria in the areas of design and architecture, comfort and cleanliness, entertainment, and accessibility and parking were examined under.

The certification was developed by Unibail-Rodamco. The independent review of all acceptance criteria via documentation on-the-spot was carried out by SGS (Société Générale de Surveillance), the world’s leading testing and certification institute, and is reviewed annually through unannounced inspections. “With the 4-star certification, we’re establishing the highest quality standards in our shopping centers and offering our visitors a unique shopping experience in a relaxed atmosphere,” said Anton Cech, Head of Shopping Center Management and Center Manager at SCS. Throughout Europe, 20 out of the Unibail-Rodamco Group’s 73 shopping centers have so far been awarded the 4-star certification.

An example of the standards one can expect from the four-star level: If you visit SCS’s new toilets, you will feel like you are in a luxury hotel. The appearance is characterized by white marble, leather upholstery, and attractive design. The facilities were enlarged, modernized, and completely refurbished. “Cleanliness and hygiene are important to us throughout the entire shopping center. We’ve invested more than €3 million in the modernization of our new 4-star bathrooms,” said Cech. A consistently high level of cleanliness is assured by half-hourly checks and ongoing servicing. So-called “family toilets” were also created. These not only offer a pleasant atmosphere, but also children’s toilets, nursing areas, and diaper changing rooms. They are also equipped with a microwave oven and bottle warmers.

Another example: For relaxing breaks from shopping, they have created cozy quiet areas with relaxing chairs throughout SCS. These zones are equipped with giant screens and complimentary newspapers. They also score points with phone charging stations and free wireless LAN.

A Look at Kyiv and Beyond

How retail-based mixed-use-projects should be developed in order to be successful in modern-day Ukraine.

Bratislava as retail market boomer – Slovakia on the rise

2021 continues to be a year full of expansion, development, and transformation for the Slovak retail market with approximately 158,000 sq m of additional retail area well underway.