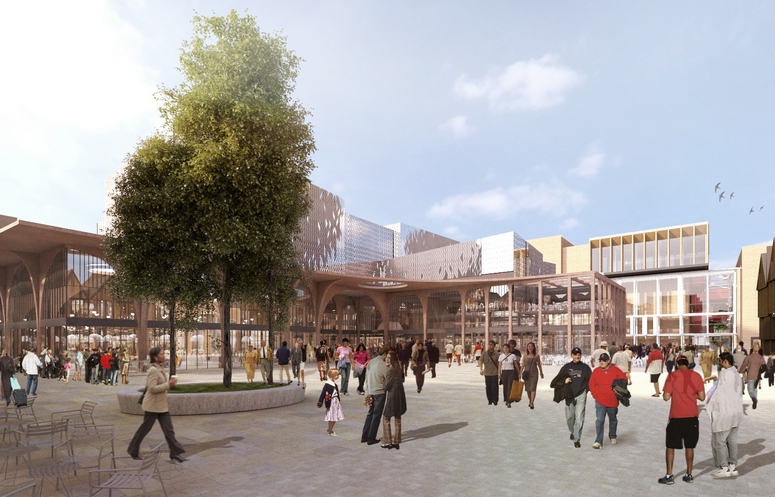 Cheshire West and Chester Council recently unanimously accepted plans to develop the Northgate area of the city center for a retail-led, mixed-use development.

The £300-million (€330-million) Chester Northgate scheme is set to deliver around 46,500 sq m of retail, restaurant, and leisure facilities over two phases of construction. The first phase will start in autumn 2017.

Picturehouse will operate a six-screen cinema providing more than 715 seats on the upper levels of the scheme, with a ground-level foyer and café bar opening onto the new Market Square and Hunter Street. A new market hall will replace the current Chester Market and a new 4-star hotel and conference center will be built as a replacement for the existing Crowne Plaza hotel.

The development of restaurants within the existing Chester Library building on Northgate Street will be brought forward to the earliest possible stage of the development to help provide a pre-theater dining offer for Storyhouse, the city’s new cultural center.

The existing hotel, together with the Forum shopping center and several other buildings, will then be demolished in 2019 so that work can begin on the second phase of construction to create the main retail offer and department store. The Council purchased the Forum Shopping Centre in December 2013 and now owns around 85% of the 5.8-hectare site. Rivington Land is managing the development.

David Lewis, Chief Executive of Rivington Land, said: “Obtaining this resolution to grant planning consent for Chester Northgate is a massive achievement on the path to delivery of this significant scheme. It is anticipated that the whole development will be completed and opened during 2021.”

In mid-September, the investors from Revetas Capital and the management team of Park Center Sofia presented the results of the repositioning and complete renovation of the first shopping center in Sofia—City Center Sofia.

The new name is Park Center—a platform that unites the 14 trade centers under the management of Revetas Capital in Central and Eastern Europe. With the new brand, vision, and concept, the mall announced its ambition to gain a leading position in the future.

“The total investment in the asset is €50 million, the rebranding and refurbishing of the shopping center comes to €6-8 million,” announced Eric Assimakopoulos, Executive Director of Revetas Capital.

The renovation program was carried out in several stages during the last two years. The scheme remained open to visitors throughout. The escalators were repositioned to allow easy access to the less-visited parts of the center and thus increase traffic to them. The common parts now have a new, modern, and clean design, inspired by the close proximity to the park.

A key part of the new concept of Park Center Sofia is the new mix of tenants, which is enriched with new brands, stores, and restaurants, including Reserved, Sport Depot, CCC, Betty Barclay, Scandal, The North Face, the modern Cache bar in the park, and the dental clinic The Smile Company. More premises are expected to open in the following months. Among these are Capella Play, 360 Health Club fitness, and a big restaurant that will ultimately complete the circle of services within Park Center Sofia.

The working shops have been kept in place and some of them have been moved to better locations. The location of the cinema is also being maintained after it opened under the Cine Grand brand with an investment of €700,000.

The neighboring food court was expanded and enriched with new tenants such as Fresh Bar, Fish & Chips, and 358 Foods. The façade facing Arsenalski Blvd. has also been transformed into a spacious terrace, which will be accessible all year long.

Dörnberg is progressing at pace. The diverse city quarter in the inner-west of Regensburg will boast generous space for living, working, and recreation.

The community center “Dörnbergforum,” with a total of approximately 20,000 sq m of leasable area right next to the Kumpfmühler bridge, is one of the first elements being built. Another tenant has agreed to rent around 3,100 sq m of space there: The two investors, Hubert Haupt Immobilien Holding and Bucher Properties, have won over the Edeka Group as a retail partner.

The full-range grocer will establish a market on the ground floor when the Dörnbergforum is completed—planned for 2018. “The retail offer for daily consumer goods is currently unsatisfactory in the inner-west of Regensburg. The supermarket in Dörnbergforum will close that gap and ensure local supply for current and future residents,” explained the developer, Hubert Haupt.

“We are very pleased to have agreed a lease with Edeka. The company is known for its large, diverse, and high-quality range and its pleasant shopping environment,” his project partner Martin Bucher added. Bucher was himself born in Regensburg and is therefore very familiar with local conditions.

The redevelopment of the London landmark, Centre Point, together with an influx of new retail brands and dining and leisure operators, plus the anticipated arrival of the Elizabeth line at Tottenham Court Road, has triggered the rejuvenation of the area around the eastern end of Oxford Street and St. Giles in the capital’s West End.

The area is poised for great growth, driven by the imminent arrival (2018) of the Elizabeth line and the redevelopment of the station at Tottenham Court Road at the eastern end of Oxford Street, which will see more than 100 million passengers pass through it each year—three times more than the current volume.

This has brought an influx of new retail brands, dining and leisure operators, residential development, and high-profile tech and media businesses. The ever-growing interest in the area has been supported by more than £2 billion (€2.2 billon) of regeneration.

A comprehensive report “A renewed London quarter emerges” has been produced by the leading property consultant Colliers International in partnership with the New West End Company, The Fitzrovia Partnership, and Midtown Business Improvement Districts. It charts the intense activity in the St. Giles area and its transformation since 2008 from what was previously a little-known area of London into an exciting hub of commercial and private investment developments, including unique dining destinations—a vibrant location that puts St. Giles firmly on the map.

Paul Souber, Head of the Central London Retail Agency at Colliers International said: “We’re now seeing a procession of domestic and international brands establishing flagship stores in St. Giles, including Flannels, Benetton, Zara, Next, and New Look. The importance of this cannot be overstated because it generates huge footfall, which in turn drives the emerging restaurant and bar scene. The location is becoming a major and exciting piece in the West End’s retailing jigsaw.”

Since its launch in January 2009, Metropolis in Moscow has been a success, welcoming leading brands.

The mall has positioned itself as a trend and fashion setter, with the first H&M and many other first-time entrants to the market. Its leading tenants include Uniqlo, Hugo Boss, Zara, Massimo Dutti, Marks & Spencer, and GAP. The recently-opened extension measuring 38,000 sq m of GLA continues to build on this legacy.

Within its distinct atmosphere and striking design, it hosts brands such as Victoria’s Secret, Hamleys, Bershka, Pull & Bear, Stradivarius, Zara Home, and Oysho. Under a vast glass roof, the fourth floor, soon to be linked by a direct escalator from the existing Metropolis food court, will soon host a selection of eateries. Elegant restaurants grouped together in this new zone will have the added attraction of a landscaped winter garden with a fully-retractable roof allowing dining under the stars during summer.

New underground parking spaces are linked to the existing building and accessible from a brand-new entrance. Three new parking levels have also been added to Metropolis’s parking garage, raising the parking capacity and allowing direct accessibility to the new fourth floor. The new direct connection between the MKZD fast train located adjacent to Metropolis and the mall will make shopping even more convenient and accessible for thousands of new visitors.

The restyling of the mall, developed in partnership with the architectural design company Lombardini22, began in 2013. The goal that has been achieved was to upgrade both the facility and what it has to offer, mainly focusing on the issues of sustainability, food, and the environment, updating the image of one of the most important assets in IGD’s portfolio, reinforcing its already solid roots in the surrounding territory, and increasing the number of entrances and sales outlets.

Restyling was carried out along three main lines: architectural work, environmental sustainability, and business trends. The architectural work involved Centro Sarca’s facade, interiors, and outdoor areas, renovating the outside of the asset and reshaping its spaces.

The focus on environmental sustainability, incorporated within a process of sustainability that IGD began working on back in 2010, has led to some important recognition: in 2013, the mall received UNI EN ISO 14001 certification and in June 2016, it was awarded BREEAM certification. It is currently the only Italian shopping center to have received certification from both these associations.

As regards what the mall has to offer, the upgrading of its merchandising mix has led to full occupancy and an increase of sales in its shops (21.7% compared to 2015). This is partly due to the redevelopment of the food court, which now offers an extremely varied and diversified range of products and has certainly met the general public’s approval (increase in sales of 25.9% compared to 2015).

LGIM Real Assets (Legal & General) announced that it has secured a new letting to the toyshop The Entertainer as part of the £18.5-million (€20.5-million) refurbishment of The Grafton, Cambridge.

New to Cambridge, the toyshop will be opening in the 46,000-sq-m shopping and leisure destination, which is benefitting from an extensive refurbishment to create an even more vibrant environment and improved visitor experience.

Tom Williams, Senior Asset Manager, Legal & General, commented: “The Entertainer is a great fit for The Grafton and complements our vision for the center. Cambridge is a growing city and, once the refurbishment is complete, The Grafton will provide an exciting retail and leisure destination for everyone to enjoy.”

The new letting announcement comes as works on site have commenced and are progressing at a good pace. Phase 1 works are well under way to create a striking double-height entrance at Fitzroy Street as well the replacement of floor, ceiling and wall finishes and double-height shopfronts to some of the larger stores.

Phase 2 works will kick-start this November to deliver a new glazed roof for the central mall, as well as new lighting and cladding throughout the center. While the work is being carried out, it is very much business as usual for retailers at The Grafton. Working closely with the contractors, ISG, the center management is committed to keeping disruption to a minimum during the refurbishment.

The 27, 000 sq m project is being delivered by Rioja Estates in partnership with Osborne+Co, its first phase is expected to open in Summer 2025 with Phase Two following soon after in Autumn 2027.

Signa and ARE Austrian Real Estate recently received building permits for the 155-meter-high mixed-use tower and an office building. This clears the way for the completion of the Vienna Twentytwo urban quarter, which has been under construction since 2019.

Construction of the 12,500 sq m phase1 of Tbilisi Outlet Village outside the Georgian capital has well progressed since the project celebrated groundbreaking early September this year.

In a joint venture, Garbe Immobilien-Projekte and Terragon have acquired a residential building in Westfield Hamburg-Überseequartier. Together with Unibail-Rodamco-Westfield, they are now working on the urban development within the mixed-use quarter.