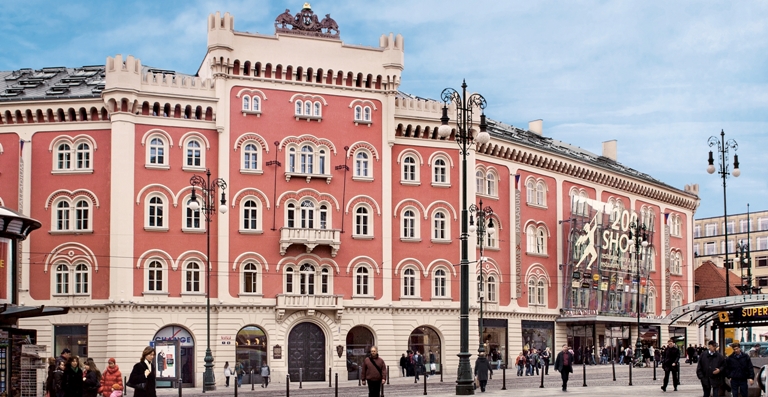 NEWS FROM THE PALLADIUM

Hannover Leasing has sold a majority stake in the largest urban shopping center in the Czech Republic, the Palladium in Prague. The transaction basis is real estate worth about €570 million. The seller was a holding company for which Hannover Leasing acquired the property and took over asset management. The buyer is Union Investment of Hamburg.

The property has a gross floor area of 115,000 sq m and is located on the site of a former military barracks in the center of Prague’s old city. “We were able to take advantage of the currently very high interest in European core properties at the right time. It is very rare to find a shopping center in an absolutely prime location in a major European city with a very high occupancy rate,” says Andreas Ahlmann, Managing Director of Hannover Leasing, who was responsible for the transaction. The seller will retain a minority share in the property. Hannover Leasing will remain involved in managing the assets of the Palladium’s owners via a consulting contract. Hannover Leasing acquired the Palladium for the holding company in October 2007 after its completion and opening.

“Through active and professional asset management, we were able to establish the Palladium as one of the most successful shopping centers in the Czech Republic. Even in the years after the financial crisis, we managed to raise the value of the property constantly,” explains Ahlmann.

The shopping center is located close to Prague’s main railway station and is connected to the public transport network via its own metro and tram station. The multifunctional property has around 41,000 sq m of lettable retail space on five levels. More than 200 shops and restaurants are represented and draw a daily average of 45,000 visitors. It also features around 18,000 sq m of leasable office space. The Palladium is almost fully let. It is home mainly to large international retail chains such as Marks & Spencer, H&M, C&A, Samsung, and Esprit. The Palladium also offers underground parking with over 860 spaces.

Why Lean Management is an imperative for future-proofing our shopping centers.

Just as the Covid-19 pandemic blurred the lines between office and home in 2020, the office of the future will need to combine elements of work, life, and experience in order to be competitive in post-pandemic city center locations, writes Nicole Pötsch, Head of Acquisitions & Sales for North & Central Europe at Allianz Real Estate.