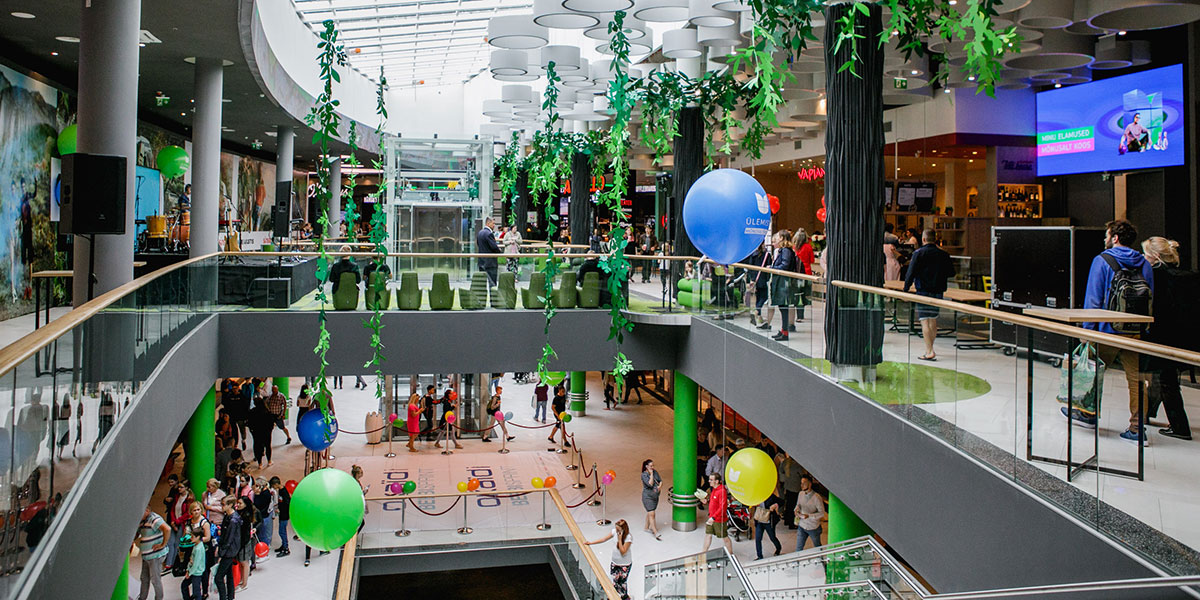 On June 13, the largest Shopping, Entertainment Centre in Baltic States in Estonia opened After Reconstruction

Linstow expanded Ülemiste shopping centre by 13,000 sq m of shopping and entertainment space, with most of the additional floorspace taken up by entertainment and food and beverage services.

“The expansion of the Ülemiste Centre has been an exciting challenge for us. We are pleased to announce that everything went to plan, and we have been able to open our doors for our customers,” said Linstow Center Management CEO Frode Gronvold. “Linstow Center Management is very proud with the opening of a state-of-the-art and future-oriented shopping and entertainment centre. The trump card for the Ülemiste Centre is that we can offer the widest selection of high-quality stores, excellent services and an enjoyable shopping environment.”

One of the biggest additions to the centre is a state-of-the-art Apollo cinema complex with six auditoriums that offer unprecedented experiences related to movies and entertainment programmes. “We are pleased to open our ninth Apollo Cinema in Estonia with a completely new seating concept, a high-quality restaurant, and our first theatrical auditorium, the Apollo Theatre,” commented the CEO of Apollo Cinemas in the Baltic States, Kadri Ärm. “Estonians have remarkable interest in visiting the cinema, and that is one of the main reasons for opening another venue in Estonia. We have seen growth in cinema admissions year by year.”

Other new features at the centre include the O’Learys entertainment centre with a bowling alley, Trampolino, which is a large trampoline centre for children, the Vapiano Restaurant, a Pet City pet shop featuring veterinary care, grooming services and a pet hotel. The sales area for LPP retail shops and Sportland has increased in size, with the latter becoming the largest sports shop in the Baltic States. Rimi has reopened its largest hypermarket format.  There is a brand new athletic club, and several other shops will open in the future.

Ülemiste shopping centre was developed by Linstow Center Management (LCM) and anchored by the most modern cinema in Europe and the O’Learys entertainment centre. The architects behind the third expansion of the Ülemiste Centre were AMB International (Norway) and Novarc Group AS (Estonia), with Priit Põldme and Reet Sapp from Joonprojekt being responsible for interior architecture. A 235-space underground car park was added to ensure greater convenience for shoppers. The expansion cost EUR 36 million, and the result is that Estonia’s largest shopping and entertainment centre will now be operating across 125,000 sq m.

Some impressions of the opening:

With their new order, the Store Makers from umdasch can once again prove their expertise: In addition to the delivery, installation and implementation in operation of the Digital Signage system by umdasch Digital Retail, umdasch Food Retail will implement the redesign and digital equipment of numerous tobacco shelves.

Atrium continues to enrich their centres with new and refreshed retail concepts. In the first half of 2022, over 50 new stores were opened with a total area of 14 000 sq m. Debut retailers in the country and in cities where Atrium is operating make up the majority of these new openings.

La Torre Outlet Zaragoza becomes one of the favourite destinations for travelers and visitors in the city after being awarded TripAdvisor's Travelers' Choice 2022.

British Land has signed nearly 2800 sq m of food, leisure and wellbeing space at Regent’s Place, its Campus located at the intersection of Camden, Fitzrovia and London’s Knowledge Quarter.

Improving the Customer Experience through the Lens of Data

Landlords, tenants, and service providers have to collaborate with each other in order to create the best customer experience. Data helps when it comes to making better decisions. PropTech enables landlords to connect using such data.