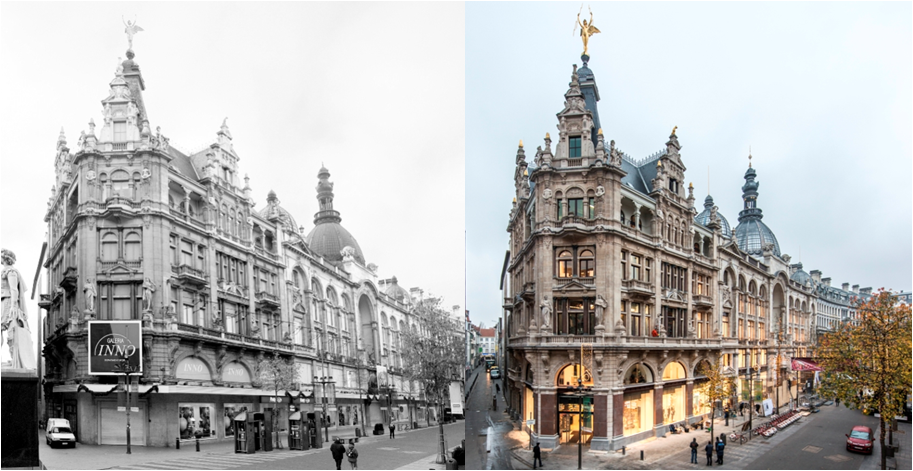 Redevco recently celebrated the completed restoration of the Antwerp Inno building. The monumental department store was built in 1901 and has now been restored to its former glory.

The Inno building underwent thorough reconstruction for 18 months. During this period, the store remained accessible to the shopping public. The restoration works to the façade, the roof, and the domes were finalized in December 2014. The canopy installed in 1957 was removed to bring the building back to its original state. Impressive red granite pillars were reinstalled at the central entrance along the Meir. New glazing was fitted to the three domes on the roof and several sculptures were also restored and regilded with gold leaf.

Eric Van Dyck, Managing Director of Redevco Belgium, explains: “This project is a perfect fit for Redevco’s sustainability policy. Preparing a more than 100-year-old building for the next 100 years is one of the purest forms ofsustainability. We are proud that we were able to do this and that we managed to maintain the monumental architecture of this department store.”

The Inno building consists of two units. The corner building at Meir 84, designed by the architect W. Van Oenen, dates back to 1903 and was known back then as the Moyson electrics shop. It was built in the characteristic neo-Flemish renaissance style and has a conspicuous statue of Elektra on the roof. The building at Meir 82 was designed in 1901 by the architect Josef Hertogs and displays an eclectic, baroque-inspired style. At the start of the previous century, it was known as the Tietz warehouses. Both buildings form part of Flanders’ architectural heritage.

The restoration involved the hard work of about 120 people and a total investment of €4.2 million made jointly by Redevco and the tenant, Inno. Part of the project was subsidized by the Flemish Government (Immovable Heritage), Antwerp Province, and the City of Antwerp. For the celebration of the completion of this considerable restoration, a lightshow on the façade ran continuously on December 11, 2014.

About the Green Roof of Nivy Station

HB Reavis has created an oasis for leisure and retail in the heart of a lively district in the Slovakian capital. The 12,000-square-meter green roof serves as a highlight.

After the two shopping center openings in the Serbian capital, the focus shifts slightly to secondary cities and the wider Belgrade region, putting retail parks in the spotlight.

Urbanization is a global mega-trend. Therefore, urban regeneration projects have become increasingly relevant. However, one has to consider quite a few things along the journey toward a successful mixed-used scheme. The most successful projects will be those that incorporates work, life, shop, play, and access to services at inner-city locations.