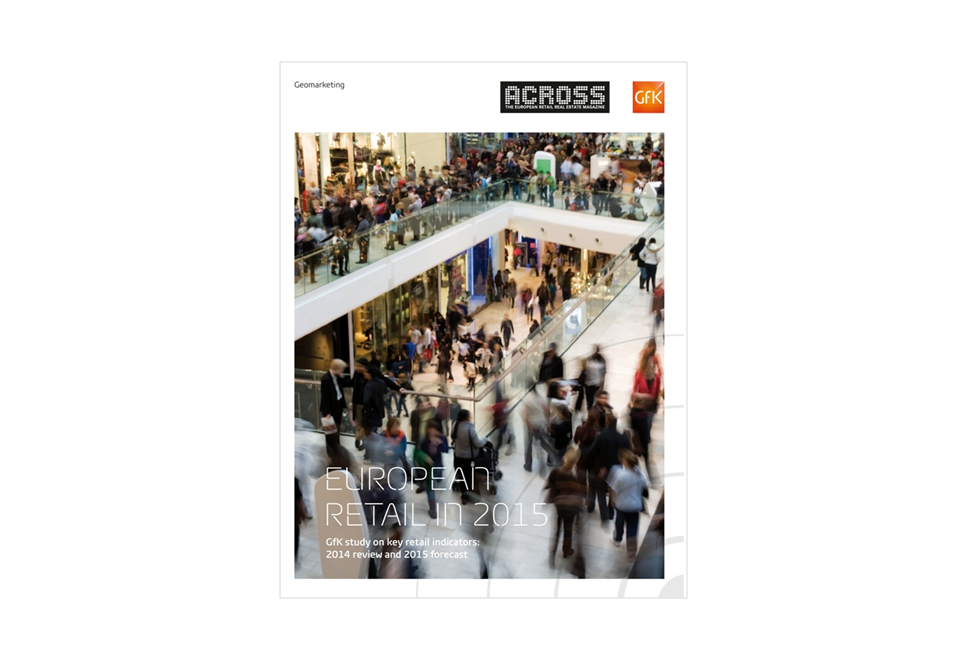 GfK has carried out a comprehensive analysis of the European retail scene in 32 European countries. The study examines purchasing power, the retail share of the population's total expenditures, inflation, sales area productivity as well as changes in retail due to eCommerce, as well as a turnover prognoses for 2015. The study will appear in the forthcoming edition of ACROSS Magazine, which will be published in June.

The study can now be obtained as  eMagazine or as PDF Download.

Purchasing power
A total of approximately €7.75 trillion was available to consumers in the EU-28 countries in 2014 for spending and saving. This corresponds to a per-capita purchasing power of €15,360 as well as a nominal increase of approximately 2.5 percent compared to 2013. But a vast prosperity gap continues to persist in Europe: While Norway has a disposable per-capita income of €30,560, Bulgaria has just €3,097, which is around one-tenth of the Norwegian figure.

Turnover prognosis
Growth in online trade is placing increasing pressure on stationary retail throughout Europe, which is why GfK predicts only moderate stationary retail growth for 2015. GfK forecasts a nominal stationary retail growth of 0.5 percent in the EU-28 countries for 2015; this amounts to an average growth of 0.8 percent when all 32 evaluated countries are taken into account. Notable frontrunners again include Romania (+5.1 percent) as well as the Baltic States (+4.0 percent to +5.0 percent). In 2014, the retail situation began to stabilize in the southern European countries strongly impacted by the economic crisis. Retail turnover will however again decline in Greece. On the basis of the currently available data for 2015 and assuming Greece does not secede from the European Monetary Union, this decline should remain modest at around -1.0 percent.

Retail share of private consumption
The retail share of private consumption fell again in 2014 among the EU-28 countries; the quota is now at 30.9 percent (2013: 31.2 percent; 2012: 31.4 percent). This development was influenced by two key factors with conflicting effects: first, the fall of oil prices in mid-2014, which resulted in decreasing costs for energy and fuel; and second, the long-term trend toward ever higher spending on accommodation, health and recreation. These expenses translate to less money available for retail consumption. This trend ultimately supersedes the short-term effect of falling oil prices.

Reinhard Winiwarter, publisher of the project partner ACROSS Magazine, comments on the significance of the study: “The GfK study offers valuable insights into the current market climate for the retail and retail real estate sectors. We’re happy that thanks to our collaboration with GfK we’re able to offer our readers greater transparency and peace of mind for their European retail endeavors.”