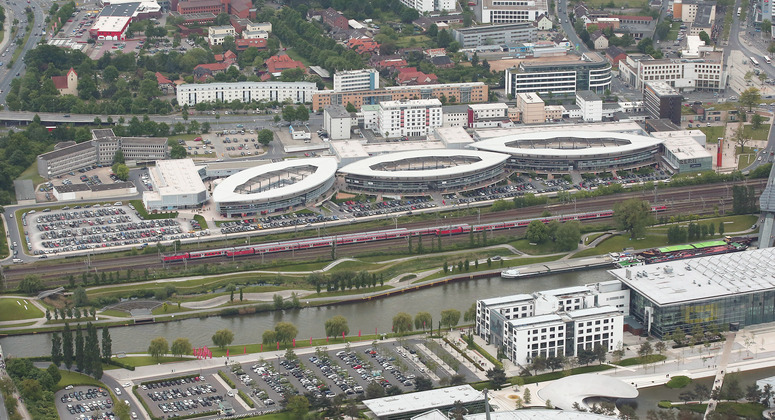 This week the building site for the third construction phase was set up in the Designer Outlets Wolfsburg.

“Since the opening of the first construction phase in December 2007, we have seen steady growth in visitor numbers and increasing sales every year and are also fully let. This means that we have the ideal prerequisites to start with the next expansion,” explains Stephan Schäfer, Managing Director of the operating company Outlet Centres International.

On the east side of the center’s premises, where a temporary visitors’ car park was located, the third stage of expansion is now being built, with 20 more outlet stores as well as a two-storey underground car park with more than 500 parking spaces. The construction phase starts with earthwork and the digging of the underground garage, which is excavated up to 5m below the walkway level. Building company Bauer Spezialtiefbau was commissioned with the digging of the construction pit and will be excavating tens of thousands of cubic meters of earth masses in the coming months.

“We are delighted that our third construction phase is now starting,” says Center Manager Michael Ernst, “With the expansion we are once again creating approximately 200 new jobs in sales, catering and services, and we also see this as a clear signal that with the Designer Outlets Wolfsburg we are committed to Wolfsburg as a business location and will continue to strengthen the city as a supraregional shopping attraction.”

Since a part of the street An der Vorburg between the police station and the center must be blocked during the construction period, the center provides a separate alternative parking lot east of the Berlin bridge next to Autoplus in Maybachweg for its visitors.

“In the autumn of 2018, we want to disclose which brands are coming to Wolfsburg. As always we will communicate this just before the opening. What we can say at the moment is that some of our visitors’ most desired brands will be among them,” says Michael Ernst.

VIA Outlets appoints Jaap Tonckens as an Advisor to the Board

VIA Outlets has appointed Jaap Tonckens as an advisor to its Board of Directors.

The x+bricks Group has signed a conditional purchase agreement with the SCP Group to acquire large parts of the repositioned grocery-anchored real estate portfolio of the supermarket operator “real”. Under the terms of the Agreement, x+bricks has secured access to a pipeline of assets valued in excess of EUR 1 billion. Upon completing the transaction, the gross asset value of x+bricks' portfolio will double to more than EUR 2 billion.

Landsec has announced the signing of three F&B operators – Five Guys, Taco Bell, and Pollo To Go – at Xscape Yorkshire in Castleford, the county’s largest dedicated leisure and entertainment destination.

Property has belonged to Unilmmo: Deutschland since 2010.

ESTAMA UK has announced the appointment of Nick Round as the new Head of Asset and Property Management. Working closely with the wider team, Nick’s role will be focussed on driving the performance of the company’s schemes and boosting the efficiency of the operational management across ESTAMA UK’s diverse portfolio.

A new shopping center Nikolsky opened in the heart of the Ukrainian city Kharkiv – with 106,000 sq m of GBA, 53,000 sq m of GLA, and 700 parking spaces. There are about 150 shops, the largest Multiplex in the city, a bowling-club, the Smile Park (an entertainment center for children), the sports club Sport Life and many more.