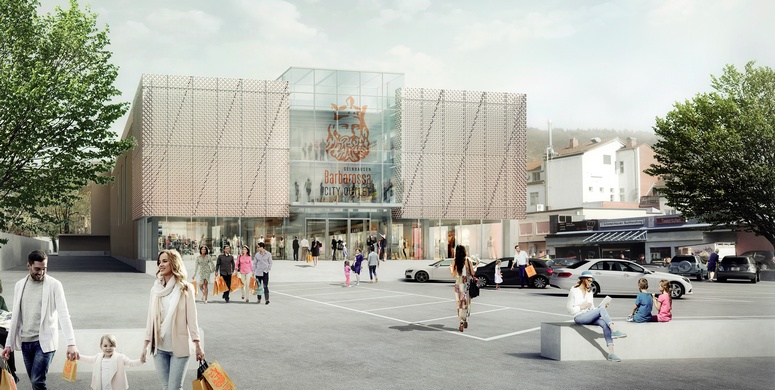 JOH will be transformed into Barbarossa. The old department store in Gelnhausen will be a modern outlet center by the spring of 2018.

At first glance, however, everything still looks the same. You still see a large building complex that has gotten on in years. This will soon be a thing of the past, however.

“The Main-Kinzig district has now approved the building permit,” commented Marc-Ernst Oberscheid. For the Barbarossa City Outlet GmbH & Co. KG’s project manager, this represents a further important hurdle that has been overcome. And at a record speed. This was only possible, however, because both the city of Gelnhausen and the construction supervision department of the Main-Kinzig district are contributing to the project. Even before this official starting shot, however, extensive work had already gone on behind the scenes—behind the closed doors of the showroom, for example.

“We have invited several interested brand tenants to so-called ‘Power Leasing Days’ in the past few months,” said Oberscheid. At the same time, the Stuttgart architectural firm “Blocher Blocher” is ensuring that the planned 60 stores on 10,000 sq m are in a visual environment that satisfies the requirements of a modern consumer society. Construction is expected to last 12 months.

McArthurGlen Group announced today that footfall has stabilized across its portfolio, with almost 45 million guests visiting their centers globally in the six months from May to November in 2021.

Neinver is celebrating its 25th anniversary and operates 21 centers –17 are outlet centers–with 1,600 stores located in Spain, France, Germany, Poland, Italy and the Netherlands. Their new Leasing & Retail Director, Joan Rouras, talks with ACROSS about the perks of the outlet center concept, possible future challenges, and his new role to maximize the performance of their 800 brand partners.

TORG International has signed a joint venture with Village Groupe to enter the Indian outlet market with a portfolio of a dozen sites.

Neinver is finalizing a new and ambitious environmental, social and governance roadmap for 2030 and ranks once again among the top 20% of the real estate industry.