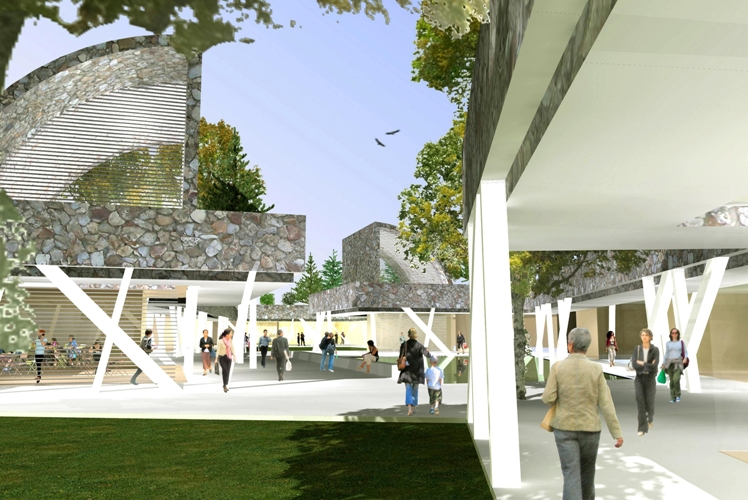 VIADUC VILLAGE RESPECTS ITS SITE. SPECIAL CONSIDERATION WILL THEREFORE BE GIVEN TO THE BUILDING MATERIALS. IMAGE: ETCHE FRANCE GROUP
Factory Outlets
May 18, 2015 10:05

A VIADUCT AS A NAMESAKE

Southern France will soon have a new shopping destination. Viaduc Village, developed by Etche France Group, will welcome customers from the beginning of 2016.

Viaduc Village wants to be the symbol of a new generation of outlet shopping. The outlet center, developed by Etche France Group, will open its doors at the beginning of 2016. It is located at a prime location at the Millau Viaduct on Highway A75 that runs between Paris and Barcelona. It is also part of a rich cultural and environmental heritage: The Grands Causses Regional Natural Park was designated a Unesco world heritage site in 2011. The project takes advantage of a population base of 3 million in addition to the 15 million tourists that visit the region each year.

The outlet center is named after the Millau Viaduct,a work by British architect Sir Norman Foster. It is a symbol of modernism that strives to harmoniously integrate heritage and traditions. As an ambassador of French know-how and high techno-logy, it is a central part of Highway A75, a major highway linking northern and southern Europe. It has been ranked the third most-visited monument in France and 40 million vehicles passed over it in 2012.

Viaduc Village will be open every Sunday of the year and on public holidays, offering diverse amenities. The outlet center seeks to provide its customers with a range of prestigious regional and world-famous brands centered around a selection of premium products Made in France. From gloves to cutlery and gastronomy, Viaduc Village will be a complete destination reflecting the region’s rich cultural heritage.

The scheme respects its site. Special consideration will therefore be given to the building materials. Inside a modern and ecologically sound architectural project, the architects will ensure the adherence to environmental standards. Along with the world famous brand shops and Made in France pool, a range of pop-up stores will enliven the Village by innovating around new products and services following the latest trends.

Outlet shopping on the way to the seaside?

Starting this May, Romania will have a second outlet center developed by Liebrecht & Wood at the Eastern exit of Bucharest.

The designer outlet in the German state of Baden-Württemberg takes shopping to the next level across all channels. Managing Director René Kamm presents Outlet 3.0.

From a Porcelain Factory to an Outlet Center

Seventeen years have already passed: In 2001, a small outlet center was built in the Upper Franconian town of Selb in the former manufacturing halls of the long-established Heinrich porcelain factory. The new Outlet Center Selb is currently under construction there.