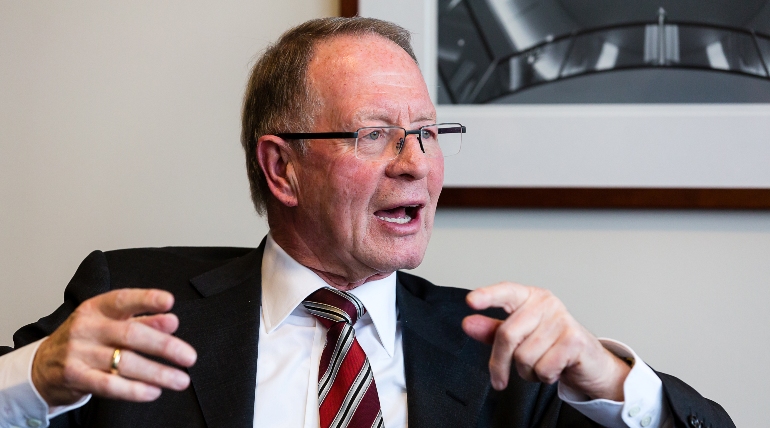 Heinrich Kraft: “Our idea was that, if tenants are doing well, so are the owners and investors.” Image: Norbert Weidemann
Development
Jun 24, 2015 09:18

A trip through time. A pioneer recalls the early years.

Today’s level of professionalism in the shopping center industry is impressive. It wasn’t always that way. From 1974 to 2000, Heinrich Kraft was CEO of ECE. In an interview with ACROSS, the center professional recalls his beginnings and what problems pioneers had to battle with.

ACROSS: How were things when you began at ECE?
HEINRICH KRAFT: Werner Otto hired me as Head of Investments in mid-1972. In fact, however, my role was more to assist him as he began to build enclosed shopping centers in Germany. Otto had imported the idea was from Canada and the US. A full-blooded entrepreneur, he promptly brought the idea to life in his home country. And he did it all with just a handful of people who knew nothing about shopping centers (laughs)! ECE thus opened seven objects from 1965. By assisting him, Otto wanted to make me an expert on ECE’s business. For hours, he and I analyzed sales figures and the tenants’ situation in the various centers. Since that represented new territory for him, too, we always went into extensive detail.

ACROSS: Were your analyses crowned with success?
KRAFT: We had learned in the meantime how to build shopping centers. In terms of management, however, we were still groping in the dark. That proved to be serious handicap. The result was that some objects were in the red in 1973. To make matters worse, the oil crisis broke out in 1974. Werner Otto then decided to halt the development of new projects, which led to enormous uncertainty among the team at that time – about 30 people in the headquarters, with six or seven in each mall. I was then entrusted with ECE’s management.

ACROSS: In retrospect, why did the malls perform so badly?
KRAFT: On the one hand due to the wrong sector/tenant mix, on the other hand because not enough attention was paid to revenues. Take the Hessen-Center in Frankfurt, which ECE still manages today. We let it through a broker. A clear error. The retailers who were prepared to pay the highest rent got space in the center. There was no strategy about where in the center they could set up a shop.

ACROSS: What happened next?
KRAFT: A period of consolidation followed. We had to get the shopping malls on track. But how? We had to work from the bottom up to build the knowledge and skills to do it. In particular, we had to improve the leases. For example, the originals included non-compete provisions that prevented a second shoe shop from moving in, for instance. We learned quickly from this and began to target an optimal tenant structure. Before that, the industry mix had not even been a topic, unfortunately. We also analyzed where in each case the best place was to locate a bank, pharmacy, etc. within a center, for example. Before then, hardly anyone had thought about that.

ACROSS: What was your strategy regarding rent levels?
KRAFT: We had agreed turnover rents and therefore intensively promoted sales in the centers. Our idea was: When tenants make good sales, they are doing well. If tenants are doing well, so are owners and investors.

ACROSS: What did you still have to work out?
KRAFT: The entire accounting system. This included above all reliable projections for the current year and forecasts for the following year, an exact accounting of utility costs, etc. Working all that out was no easy job. Thankfully, I had the freedom to hire management colleagues. I successively created the management areas development, construction, finance and accounting, letting, and center management, which still exist today. This management circle was a close-knit community. We were doomed to success.
Since we were taking a break from developing new centers, we dealt in this round – as already mentioned – with restructuring. We fought for every square meter in the shopping malls. We placed kiosks under the escalators and the like. We also took advantage of vacant commercial space in order to optimize the mix of offerings. We were the first to gain Hennes & Mauritz (H&M) as a tenant in Kranzlereck in Berlin – in a night of marathon negotiations accompanied by a number of secretaries. They tapped away and corrected continuously on their typewriters. The lease, with five carbon copies, had to be ready for countersigning without delay at the end of the negotiations. We were tough.

ACROSS: What marketing measures did you take in the malls?
KRAFT: Here, too, we acted as pioneers and conjured several advertising concepts out of our hats. One example was a campaign called “the most beautiful butterflies in the world.” In the Alstertal shopping center, we distributed coloring kits to the children, who colored in the butterflies. The drawings were hung by the thousands in the mall and the parents came with their children to admire their works of art. This strengthened customer loyalty. Step by step, we developed ECE-specific measures that increased the popularity of our shopping centers. And don’t forget, people then did not even know what a mall was! They said, “Yes, but we already have a supermarket.” We had to raise awareness of our concept first. But we persevered and increasingly made a name for ourselves. When the success came, the full-blooded entrepreneur Werner Otto was then open for developing new shopping malls.

ACROSS: How did decision-making work back then?
KRAFT: In the early days, we made all the important decisions in our so-called Monday meetings. Nothing was ever postponed. This required a constructive culture of debate. The longer those meetings lasted, the better the resulting decisions. This set time brought the team together and informed them comprehensively. The construction manager, for example, thus gained extensive center management knowledge. By no means could the key functional areas begin to live lives of their own. They had to be closely linked.

ACROSS: What maxims did you follow when developing shopping malls?
KRAFT: We always structured them so that they could keep up with the transformation of the retail sector. You had to be able to make big stores from small stores and vice versa. We also relied on prime locations, as these are the last stumble. If bricks-and-mortar retail gets into trouble, it happens in secondary locations. One more point is important: We were quite willing to forego rental income in order to keep a certain sector in a center to ensure a balanced mix of tenants.

ACROSS: How did the shopping centers change over the years?
KRAFT: They used to have a large proportion of independent retailers. There were shops from independent bakers, butchers, confectioners, caterers etc. After all, the shopping centers always reflect the structure of wider retail. Due to the general expansion of branch operations, the share of independent retailers in the centers shrank. Many people often blame malls for the proliferation of chain stores, which is not justified – this was a development within all of retail. Centers generally just reflect the structure of the retail sector. The sector structure also changed dramatically. Just one example: In the ‘70s, every mall was home to fur and lamp shops. These are now present only in exceptional cases.