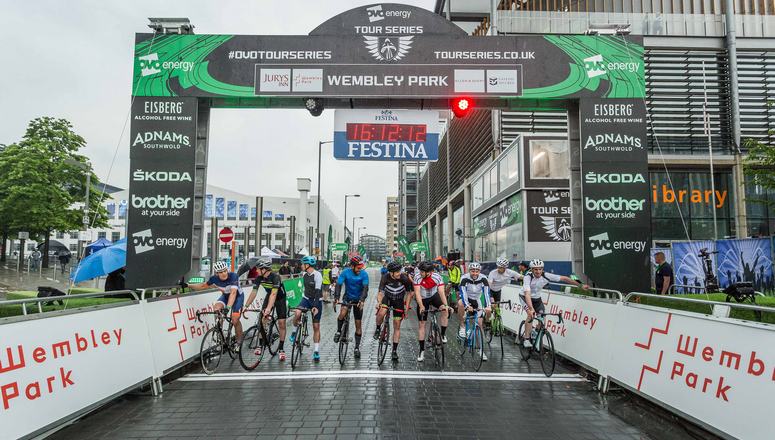 London’s Wembley Park hosted a key round of the OVO Energy Tour Series on May 29,2018. The cycling event, staged for a second time at Wembley, is the only such event this year in the capital. Property and retail industry teams raced with elite riders.

A team from Quintain, which is delivering the £3 billion regeneration of Wembley Park, raced against cycling enthusiasts from the property and retail industries. Each corporate team, wearing company branded jerseys, was joined by an elite rider. Together, they competed in a relay race along a 1.3km course, adjacent to the iconic Arena Square against the imposing backdrop of the world-famous Wembley Stadium. The team from Quintain battled through the rain to claim first place, followed by the team from Cushman & Wakefield.

Matt Slade, Retail Director of Wembley Park for Quintain, said: “We’re delighted to welcome back the OVO Energy Tour Series to Wembley Park for a second year. Wembley has a rich and varied sporting heritage, and we’re very pleased to showcase some of the country’s best racing to our industry and local community. We’re excited to have hosted fans from across London and the South East who came here today easily thanks to the area’s excellent transport routes.”

The OVO Energy Tour Series is now in its tenth year of competition. The series is unique as the focus is competition between teams. Britain’s top male and female professional cycling teams battling it out at every round for the right to be crowned Britain’s best. The cycling event is being televised on ITV4 on Thursday 31st May at 11pm.

For nearly 100 years Wembley Stadium and The SSE Arena, Wembley have been recognised as world-renowned venues attracting over four million people every year to experience some of the greatest sport and music acts. Wembley Park is continuing to develop its global reputation as a key London destination for major events, with the OVO Energy Tour Series bringing live cycling action, for free, to local residents, Londoners and visitors.

Cycling has been a key part of Wembley’s sporting heritage. It hosted the Six Days of London event from 1936 to 1980 in the Wembley Pool, now known as The SSE Arena, Wembley, which opened two years prior in 1934.

Wembley Park has excellent transport connections to central London and the home counties via the Jubilee and Metropolitan tube lines from Wembley Park station which is part of the Mayor of London’s Night Tube initiative. It is also has an easily accessible overground on Chiltern Railways from Wembley Stadium station. The destination is just nine minutes from Marylebone and 12 minutes from Baker Street.

The opening of the largest inner city regeneration project in Rotterdam in recent years, FORUM Rotterdam, took place on 24 September 2020, with a small gathering and in full compliance with the current COVID-19 guidelines. The opening event of this mixed-use project took place in the theatre of Donner bookshop, in the presence of Alderman Bas Kurvers of the Municipality of Rotterdam, developer Multi Netherlands, and the investors Deka Immobilien GmbH, Primark Netherlands B.V., Syntrus Achmea Real Estate & Finance and a.s.r. real estate.

Despite the economic difficulties dictated by the global COVID-19 pandemic, BALFIN Group has not withdrawn from investing in expanding and improving its retail network. JUMBO and SPAR have opened two new stores in the tourist cities of Vlora and Pogradec, being closer to consumers and helping employment in these cities.

Ingka Group has given support and signed up to a new guide raising the bar on climate leadership, ’Climate Leadership Now: The new bar for business action on climate change’, published by the We Mean Business coalition*.

Icon Outlet has revealed its performance figures for the 12-week period post-lockdown, with sales increasing by 30% between the first week and the 12th. Sales have trended from approximately 65% of previous year like-for-like at reopening to around 95% like for like in weeks 11-12. Icon Outlet’s weekly footfall has also doubled since reopening and now stands at 75% of prior year footfall. The latter compares to an average footfall of 59% of pre-Covid levels for the average London High Street according to Springboard*.

Haute Dolci, the luxury dessert operator, to open in a prime location on Wembley Park Boulevard

Quintain has secured an “extraordinary and unforgettable” taste experience, set to open in a prime location in Wembley Park, London’s newest cultural neighbourhood. Haute Dolci, the luxury dessert operator, has signed to open in a 3,350 sq ft restaurant including a mezzanine, its first location in London.

The festive lighting and decoration solution provider a new range of photo points for the season.