MAIN STREETS ACROSS THE WORLD 2018

The annual Main Streets Across The World report, celebrating its 30th anniversary, tracks 446 of the top retail streets around the globe and ranks the most expensive in 65 countries by prime rental value utilising Cushman & Wakefield's proprietary data.

For the first time in five years, Hong Kong’s Causeway Bay has replaced New York’s Upper 5th Avenue as the world’s most expensive retail street by rental value, according to data from Cushman & Wakefield.

The annual ‘Main Streets Across the World’ report, now in its 30th year, tracks 446 of the top retail streets around the globe, ranking them by their prime rental value according to Cushman & Wakefield’s proprietary data, which includes a list of the most expensive streets in 65 countries.

London’s New Bond Street is the most expensive European location and third globally. 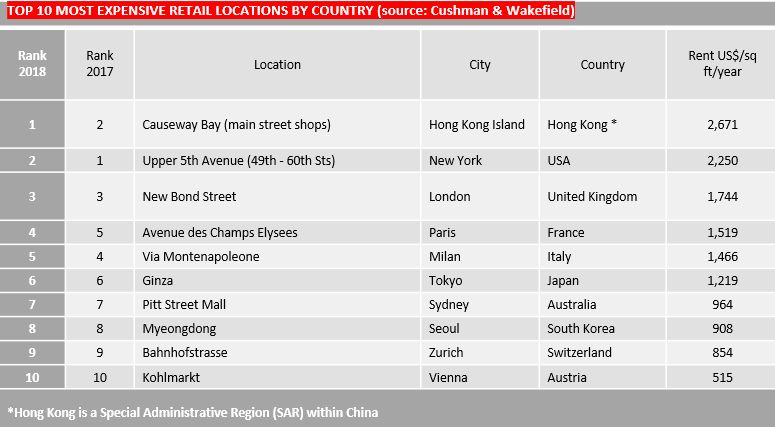 A significant decline in New York rents has seen Upper 5th Avenue slip back to second place globally, with average rents at $2,250 psf/yr compared with $3,000 in the previous 12-month period. Despite a small decline in average rents, Hong Kong’s Causeway Bay area takes top spot, with a figure of $2,671 psf/yr. London’s New Bond Street meanwhile is the most expensive European location, in third place globally, with rents broadly flat year-on-year at $1,744 psf/yr, underlining the fact that luxury and high-end retailers still see the UK’s capital as a key retail destination.

Elsewhere in the top 10, the Avenue des Champs Élysées is in fourth place ($1,519 psf/yr), with Milan’s Via Montenapoleone in fifth position ($1,466 psf/yr). In sixth place is Tokyo’s Ginza, which is the highest-ranked Asian street after Hong Kong, with rents on average costing ($1,219 psf/yr).  Streets in emerging markets in Africa and Latin America account for most of the locations at the other end of the ranking, with rents as low as $20-30 psf/yr.

The first edition of the Main Streets report in 1988 showed New York’s East 57th Street was the world’s most expensive high street at $425 psf/yr. Since then the number one spot has been dominated by streets in either New York or Hong Kong, with only Tokyo’s Ginza outside these able to achieve this.

“While global trends are not completely uniform, there are some common themes. The most notable include the continued growth of online, omni-channel retailing as standard and significant investment in store design. While technology is still a major disruptor in retailing, it is also enabling physical retail to fight back as it allows retailers to better understand their customers and to enhance the in-store experience.”

Justin Taylor, Head of EMEA Retail at Cushman & Wakefield, said: “There is still a healthy future for the sector but we are moving to a ‘beyond retail’ phase driven by societal and technological change meaning business models will also need to adapt. Traditional retail will survive and in many locations prosper, but it will likely form a smaller part of the overall occupier mix. Even in these most expensive high street locations, we are likely to see a mix of uses such as restaurants, leisure, fitness and services.

“As a result, traditional retail is therefore being resized, reinvented and reimagined. This is most evident in the US and the UK, both of which have felt the force of retailer restructuring and shrinking store networks in some sectors, as well as a downward readjustment of rents in some areas. Equally, however, the disruption is also creating opportunities for exciting new operators and formats to emerge.”

Maja Procz is Global Head of Transactions at Commerz Real

Maja Procz (45) has been the new Global Head of Transactions at Commerz Real since 1 August 2020.

CBRE Global Investors has announced the significant completion of a key milestone, the raising of the angel wing sculpture, as part of the centre’s £16m refurbishment plans at Angel.

The HATRIC Q2 retail park in Hartberg, Styria (Austria) has changed hands. Having previously acquired the adjacent phases HATRIC Q3 and Q4 from Rutter Immobilien Gruppe upon completion in 2017, Union Investment has now also secured the Q2 building with its approximately 6,800 sq m of rental space, which opened in 2005.

pbb Deutsche Pfandbriefbank has extended an investment loan facility in the amount of €89.7 million to the European Outlet Mall Fund, a real estate fund managed by Nuveen Real Estate, one of the largest investment managers globally, for the financing of phases 1,2 and 5 of “Designer Outlet Parndorf” centre near Vienna. pbb acted as arranger, lender, agent, and security agent under the facility.

VIA Outlets – Europe's fastest growing owner-operator of premium fashion outlet destinations – has partnered with leading testing and certification expert Bureau Veritas in the light of Covid-19 to create a ‘Safer Shopping’ certificate, which has now been granted to every centre in VIA Outlets’ 11-strong portfolio.

Primark announces the rollout this week of its nation-wide recycling programme, inviting customers to donate their pre-loved clothes, textiles, footwear and bags from any brand to be ‘re-loved’ via the Primark In-Store Recycling Scheme.