Retail is protean by nature and adapts continuously to the different components and changes in its environment. Physical and online retail are becoming blurred and part of an overarching retail strategy. It is no longer a matter of physical retail and e-commerce being in contention, as the two complement each other: omnichannel strategies are of the essence.

E-COMMERCE CONTINUES TO GROW IN FRANCE

Although there has been a decline in the average basket, to € 65.5, this erosion has been easily compensated by the greater frequency of purchases. The average annual basket per shopper increased in 2017 to about € 2,200, i.e. an increase of about 190% in 10 years.

The French e-commerce should continue to grow in 2018 and break through the symbolic € 100bn threshold in 2020. Consumers are increasingly turning to M-commerce (mobile phone or tablet) for their shopping. Sales have grown constantly and are expected to increase significantly again in 2018.

Stores are tending to diversify their activities to offer services and experiences associated with products and the brand. Consumers are no longer seeking just to buy. They want experiences. The emphasis is on individuals and customised living spaces that have a particular ambiance, an atmosphere specific to the brand. 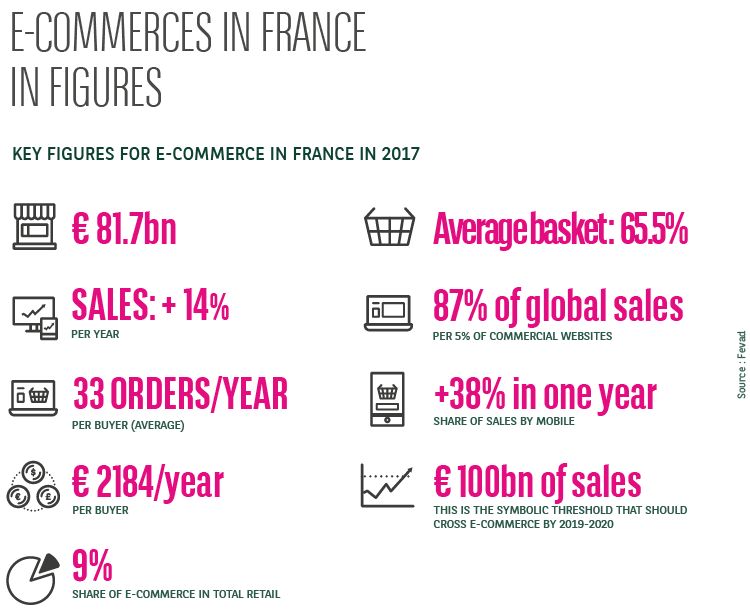 Third Place retail spaces therefore represent an opportunity to bring the brand universe close to the consumer’s universe, to integrate their social and cultural circle, their imagination, through recurrent visits motivated by activities other than purchases (discovery of new products, meetings, lessons, workshops, relaxation, etc.). A strong personal bond is created between the brand, the place and the visitors. It involves retailers positioning themselves in the everyday life of inhabitants, assisted by new technologies that enhance the experience offered and the personalisation of the client journey.

“Third space retail places thereby become a space to live, share, relax and create. The client has a central place, joins a community and participates in the brand. Sport with Reebok is an example of third Place retail spaces : at the crossroads between sport, fashion, art and culture (gym, events, conferences and think-tank, team building, exhibitions, café, meeting rooms… but also a Reebok store, collection launches etc.)” said Thierry Bonniol, Director of the Retail Department of BNP Paribas Real Estate Transaction for France. 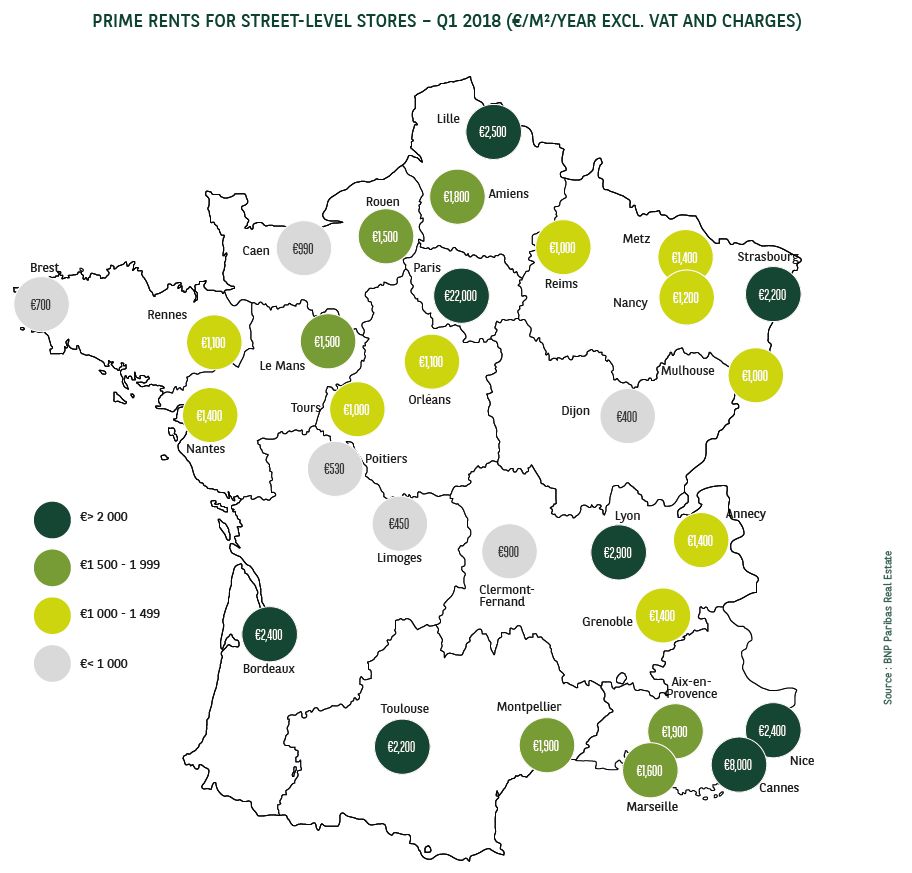 Indeed, an analysis of vacancy rates in the city centre shows a mixed situation for the retail market in France. Some medium-sized cities in particular have been heavily affected with vacancy rates of over 10%. ”However, other cities still have a thriving retail scene with vacancy rates of less than 5%. As such, the socioeconomic context of the territory, the balance of competition between different formats and the quality of the environment generally go hand in hand with the health of high street retail” says Thierry Bonniol.

STREET-LEVEL STORES: A WELL-ESTABLISHED HIERARCHY OF VALUES BETWEEN CITIES

At the top of the list: Paris. Street-level stores are the most common. One of the trends observed in the capital is the increase in so-called convenience stores (small food stores and supermarkets in particular). Local stores, organic food shops and specialized food shops (pastry shops, chocolatiers, and wine merchants) are also experiencing strong growth. Train stations and new urban neighbourhoods that will emerge in the wake of the new metro lines of the Grand Paris Express are also likely to attract a new retail offering. 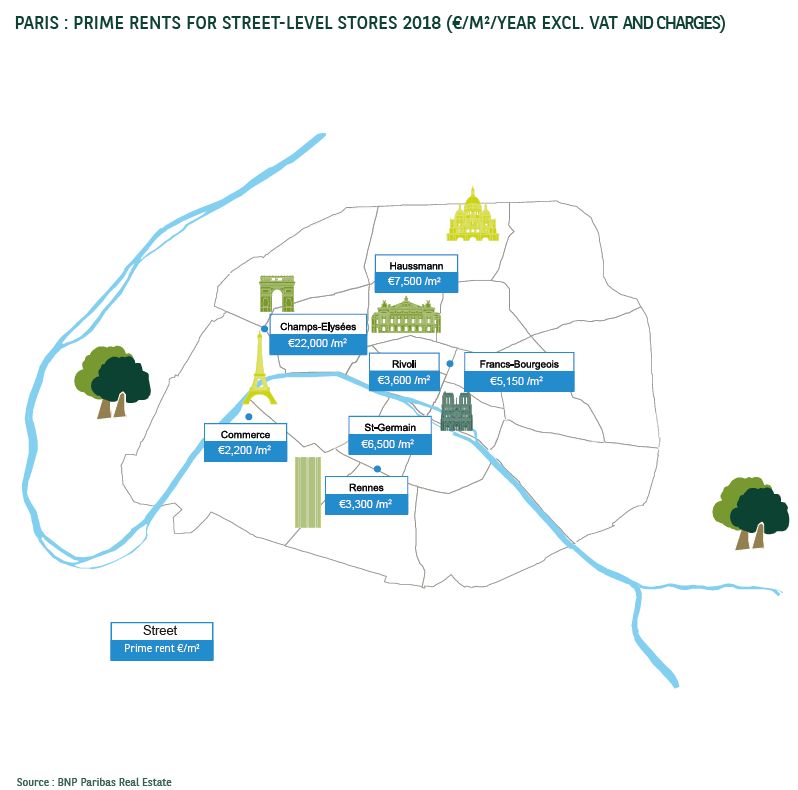 With some €500m over the first three months of 2018, investment in retail increased by 6% vs. Q1 2017, to €467m. In Q1 2018, retail represented 13% of overall investment in commercial real estate in France, vs. an average of 18% since 2013. « Investors’ attraction to assets in Ile-de-France has been undeniable in recent years. Similarly, acquisitions in the regions have been significant, notably thanks to the investments in the out-of-town stock (shopping centres, retail warehousing and retail parks) » says Cyril Zaprilla, Director of Capital Market Retail for France.

THE MARKET IS MOSTLY DRIVEN BY FRENCH INVESTORS

Cash-rich players are the main protagonists. Funds have been very active so far in 2018 (40% of investment). Carrefour Property bought the Grand Vitrolles shopping centre for about €200m; this was the biggest deal of the quarter. SCPI and OPCI took third place in the rankings: their high inflows notably enabling them to invest in retail assets. 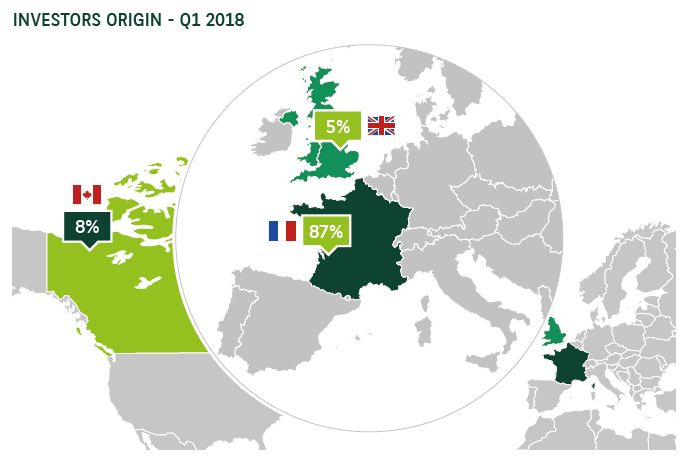 Over the first three months of the year, 87% of investors in retail were French, with La Française AM in particular driving investment over the quarter. We noted the presence of Canadian BMO Real Estate Partners, which invested in a core asset on Rue du Faubourg Saint Honoré in the 8th arrondissement of Paris. The 5% attributed to UK funds correspond to the acquisition of an out-of-town store in Pessac by Tristan Capital Partners.

Yields were general stable for the three types of retail asset. The prime yield for street-level stores is now 2.75%. This rate is nevertheless likely to narrow in 2018, with a deal expected at a yield of around 2.50%. With respect to shopping centres, a historical floor of 4.20% has been reached. With respect to out-of-town retail, the prime yield stands at 4.50%.

“There is still a keen appetite for retail, which shows that this asset category is reaching beyond its safe-haven status to become a strategic holding in investors’ portfolios. After a slow start, 2018 should be another buoyant year for the three asset types. With a slight decline vs. 2017, we may nevertheless draw close to the 10-year average of €3.6bn.” foresees Cyril Zaprilla.